Jack and the Beanstalk 2014

Jemma is delighted to have returned to the Alban Arena once again last Christmas for Evolution Productions to play Cinderella alongside Gareth Gates, the delightful Bob Golding and CBeebies star Andy Day.

Jemma has enjoyed playing the role of Princess Jasmine at The Alban Arena, St Albans for Evolution Productions this Christmas.

Jemma will be playing the role of the eponymous heroine 'Snow White' for Evolution Productions this Christmas at The Alban Arena, St Albans, alongside Toyah Willcox, Phil Gallagher, Bob Golding & Brody Hutzler.

Jemma is not heading so far afield this Christmas and is looking forward to playing the part of 'Sleeping Beauty' at The South Holland Centre, Spalding. Her family are especially pleased as it means she can make it home in time to spend Christmas Day with them!

This Christmas Jemma will be heading southwest the Octagon Theatre, Yeovil where she has been asked to play Alice Fitzwarren in Dick Whittington by David Lee of Pantoni alongside Andy Scott Lee in the title role.

Adore - A Musical About Not Fitting In

Jemma has recently been cast in the leading role of Cosima for this exciting new production. She has already completed some studio sessions for the soundtrack album recording, together with a Workshop of the show and a photo/promo video shoot.

Jemma will be spending Christmas 07 in Middleton, Manchester where she’s scheduled to play Alice Fitzwarren in the Mark Andrews Production of Dick Whittington at Middleton Civic Theatre. The run ends on 24th December though, so at least she’ll be home to open her presents on Christmas morning this year!

Encore - A Tribute To The Musicals

A showcase and video shoot for this production is scheduled for May. Followed by a series of dates thoughout 2007.

Sean, Ian and all the team at Magic Static Film Productions are busy finishing the editing and post production of ‘Adventures In Technicolor’, in which Jemma stars as the bubbly rollergirl ‘Archie’! Watch this page for details of screenings and we’ll post them as soon as they become available.

Jemma is appearing as Cinderella at the Embassy Theatre in Skegness, alongside Duncan Norvelle, Kieron Richardson (’Ste’ from Hollyoaks), and Howard Leader. She was especially thrilled as it was her first time as the classical pantomime heroine she’s always longed to play. 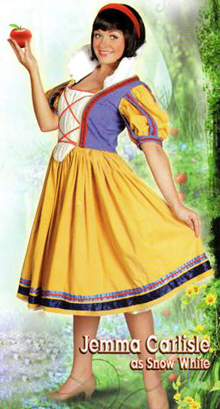 These are the news items which have been posted from time to time on Jemma's homepage. They are only selected highlights of Jemma's activities so if you have any enquiries about any of Jemma’s other appearances or recordings & video etc you can always send us an email at admin @ jemmacarlisle.com and we’ll do our best to help you out.